Minority Senator Mitch McConnell is working for the citizens of America.

Today our country is in shambles teetering on becoming a 3rd world country!

So Mitch; which political party would you now say actually built our (Trojan horse)?

McConnell became a Millionaire since coming into ‘politics in 1984 and as a senator a multi-millionaire because of the (trump tax cuts) that put a major burden on you the votes.

He like trump was diagnosed with optic neuritis and was deemed medically unfit for military service in 1967 Vietnam War??? 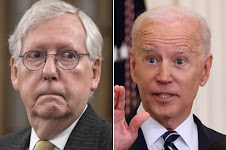 Now he is calling the Presidents (Clean up after Mitch Program), a Trojan Horse?

Give me a break!

Speaking in Erlanger, Kentucky, on Wednesday, the GOP Leader raised concerns about the level of the national debt and reversing the corporate tax cut that Republicans passed in 2017.

“It’s like a Trojan horse,” McConnell told reporters. “It’s called infrastructure, but inside the Trojan horse it’s going to be more borrowed money, and massive tax increases on all the productive parts of our economy.”

This is a ‘Free Country’, our citizens past, present and in the future join the military to help keep it so! The Republican Party did ...